The Age of Engagement 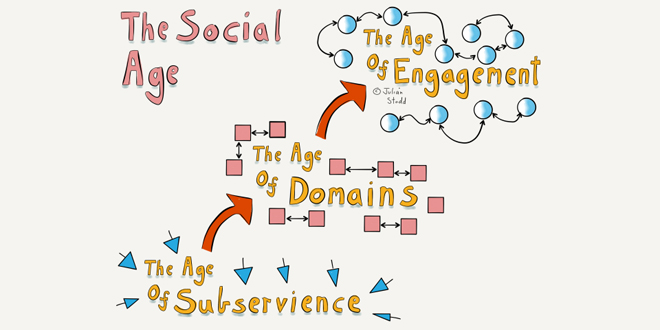 By: Julian Stodd, Author on the Social Age (UK)

The mechanisms and mindset of engagement in many organisations lags far behind the lived reality of the Social Age: Organisations exist in a realm of expertise, domain specific input, hierarchical power, at a time when communities are rising, co-creation is maturing, and dynamism is key. The solution will not be adaptation within an existing mindset, but rather a paradigm shift to a new space: the Age of Engagement.

I’ve been thinking about this a lot recently, trying to quantify the change, reflecting on how we got here, and today, i thought i’d share a strand of thought around the evolution: our journey from the Age of Subservience, through the Age of Domains, and finally into the Social Age. The Age of Engagement.

As our earliest societies emerged, we developed models of subservience, enforced through physical dominance, the invention of power structures (proto-religious or cultural), and simple poor communication. People knew no different. Power was absolute and hereditary, codified into castes, royal lineage, priesthoods, aristocracy, serfdom, and slavery. There was no standardisation, nor any pathway between the rulers and the ruled. The notion of meritocracy did not exist.

The Age of Subservience

Through the advent of technology, improved communication ecosystems, better transport, and emergent transport modalities, as well as the revolution of printing and broadcast, we moved into the Age of Domains. The defining principles of the Age of Domains are expertise, measurement, codification, standardisation, replication, scale.

The formalisation and scaling of education, alongside the pervasive spread of books, and the eventual emergence of fully synchronous broadcast, and connected transport, led to the centralisation of power through the emergence of the Victorian organisation, the pyramid of organisational power. Pyramids of power that were vertically segmented by specialisms, standardised and trained. Self supporting domains of expertise, that coincidentally acted as controlling entities.

Whilst standardisation of time and quantity allowed us to sell our days and our goods in common ways, so too did it allow for new mechanisms of collectivism and control. Organisations that aggregated and distributed labour: the new mills and factories, and the massive scaling and emergence of bureaucracy.

This was a transition time: whilst the Age of Subservience allowed the unchallenged succession of power with no concern for merit, the Age of Domains rewarded the radical innovators. For the first time, it permitted the disruption of formal power through merit. It enabled the industrialists to build huge wealth an influence, with the ‘new rich’ sitting uneasily alongside the aristocratic elite. So domain specific success and expertise did not oust absolute control, but it eroded it.

The Age of Domains

A key feature of the Age of Domains is that is rapidly moved to codify and cement it’s own emergent power: this is a fascinating feature of hierarchical systems, that they reinforce and perpetuate themselves, if left unchecked.

So in the Age of Subservience, the individual was held in place through absolute power, ignorance, and an inability to effectively collectivise, and in the Age of Domains, we achieved a certain freedom, but still shackled within organisational hierarchy and systems of ‘professions’, education, and reward, that effectively still limited opportunity. You had a freedom of movement and self determination, with some potential to rise to the top, but largely if you played the game. And engagement was still controlled.

Until everything changed, again, and we entered the Social Age: the Age of Engagement.

The most visible manifestation of change around us is the technology, but the technology has driven, has shattered, everything else.

In the Age of Domains, both community and co-creation were limited by technology. But today they are not. We are, instead, limited only by mindset. We are seeing the emergence of radical new behaviours, and the emergence of massively disruptive networked power, all playing out against a Domain system that tries to limit us, organisations that are designed, and optimised, for an outdated model of organisation.

Many organisations I speak to worry that they cannot get engagement, but that is precisely because they are shutting out the very voices that they want to hear, and the mechanism to hear those voices will not be pure technology, nor certainly new rules. The mechanism to hear the unheard wisdom is to evolve: to open up the formal hierarchy to new voices, and to learn to respond not with formal power, but with humility.

The Age of the Generalists

We are in the age of the generalists: cross connected, sense making, dynamic. We will still have domains, but they must be more fluid, and the skills of the Social Leader, to connect, to sustain, to nurture, to drive fairness, to do what is right, these are the skills that count in a connected world.

We need new technologies that support democratised engagement, not ones that utilise measurement to somehow value and control it. Most of the legacy systems, and a good many of the emergent social ones, are still based on a premise of power and ownership that lies in the Age of Domains. In the Age of Engagement, we will need new ways to engage!

Subservience will no longer be tolerated, but so too we will reject the absolute control of a fully formal hierarchy. Just as the mills and emergent factories decimated the aristocratic models of power, so too with the socially connected community decimate the hierarchical organisation, and possibly the dominant, asymmetrically connected, wilfully blind, model of government we operate in many western states. Engagement and power will shift to the trans-nationals, the communities of social brand power, the new Victorians.

Alarmist: maybe. Maybe we should be alarmed. This is a paradigm shift, a fundamental evolution of power and organisation. It’s the Social Age, and we had better get ready, because it’s already here.